"Never Give Up" by guest author, Makayla James 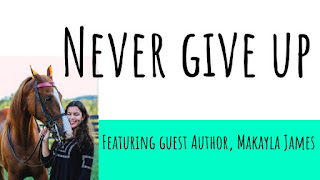 “NEVER GIVE UP!” I shout to the world.

No one should ever give up on their dreams. If you want it, go for it! I did.

Once upon a time, I was a dreamy, horse-obsessed girl. I looked up to those who won ribbons at national and world horse shows. I said, “I want to be like them.” I watched them compete for Team USA in equestrian competitions and I said, “I want to do that.”

So, here I am. I have won ribbons at national and world shows. I am getting the chance to try out for Team USA.

How did I do it? I never gave up. I struggled, I fought, and I even cried, but I never gave up. There were times when I thought, “I can’t do this, I will never be like them.”  Every time I thought that, I vowed to stay positive, and I told myself, “Never give up.” People asked me, “How do you stay so positive?” Well, it wasn’t easy. I am human, and I make mistakes. I have been defeated and let down. The more I failed, the more I persevered. So, I worked for it. While some of my dreams have come true, I still have many to accomplish.

Remember, don’t dream your dreams, live them. Oh, and never give up.

Makayla rides at the Louisville Equestrian Center in Taylorsville, Ky.  She will try out for the United States Saddle Seat World Cup team in December.
Posted by Unknown at 5:17 PM No comments:

What Story are YOU telling? 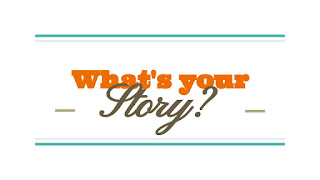 Thanks to Facebook "memories" I have been reliving last year's road to nationals.  It breaks my heart to see posts where I was so down, so frustrated with myself.  It makes me smile to see the good posts, but also anxious because I know the outcome of that season.

And here I am, still reliving it every day but trying to focus on the task at hand.

But these "memories" make me wonder: what story was I telling last year? Is it a story of defeat?  Failure? Even though I didn't make it to the final round, I cannot say it was a story of defeat.

Because, you see, we are telling a story whether we like it or not.  And just like in the cinemas or dusty bookshelves, there are so many stories to be told, each wonderful and unique.  Some are stories of tragedy, love, despair.  Some are comedies.  Some are tales of triumph.  Some are horror stories.

I have really resisted the urge to label last season as "horror" or "comedy." Because let's be real--it was a lot of both and not in a good way.  Kind of like those B-movies that use ketchup for the really gory scenes and it is so ridiculous you just can't look away.

However, I have realized one simple truth: we are in control of what story we are telling.

And my story is an inspirational story.

My story is about a girl who refused to give up.  A girl who loaded probably hundreds of bales of hay and led a thousand beginner children in the summer months.  This is the story of a girl who adopted the motto of "I will ride anything".  A girl who went to the gym, who lost 80 pounds, who had the courage to try one more time. And not that success is measured in blue ribbons, but there have been quite a few of those this year, too.

But above all else, this is the story of a girl who has decided to become a champion.

I am not sure how long it will take, or how I will get there, but I am in control of my own story.

And you know what? You are too.

So what will your story be?
Posted by Unknown at 6:20 PM No comments:

Riding Like A Lady Truck Driver: The Misadventures of an Adult Amateur

Promote Your Page Too 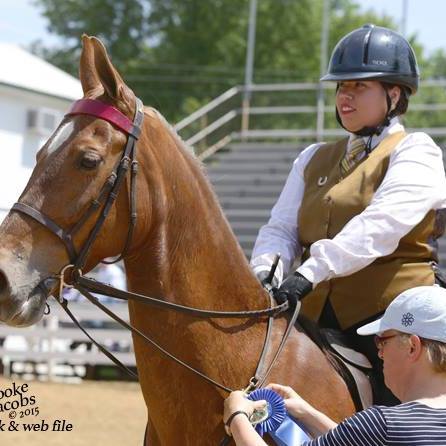 I am Leslie, a twenty-something adult who is returning to the equestrian world after a ten year hiatus. These are my stories, thoughts, and experiences as I navigate this world one more time... and try not to fall off in the process.